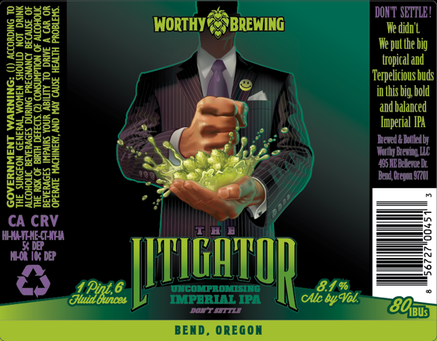 They embellish the facts.  Hmmm. That quote. Did Billy the Shake really say that?

Ok, lawyers are an unpopular lot (until you need one). Granted, the name or label may not evoke the warm and fuzzy’s (although my strategically deranged colleagues will appreciate Mr. Smiley). But the beer. Is it any good?

On that count there is no dispute.  For this project, Worthy called out it’s Hop Bomb Dismantling Squad. The mission: big and bold tropical fruit flavor without the exploding your tongue to smithereens. We ladled in judicious amounts of all the goodies: Amarillo, Simcoe, Azaca, El Dorado, Ekuanot, Citra and Mosaic. 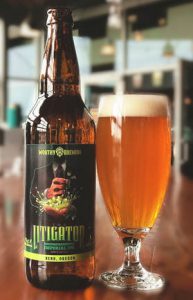 The verdict? You decide, but we think it’s a crushing win for life, liberty and the pursuit of hoppiness.  A respectable 8.1% ABV with a deceivingly pleasant 81 IBU.

So, at your next dinner party, when the food, drink and barbs are flying, hold court with a bottle of The Litigator. Since we know most reasonably prudent beer lovers hate lawyers, if you’re confident enough to want it, we’re going to make you work for it.  We will be offering The Litigator at our pub only.

But if you really think you can handle The Truth, we’ll distribute it to you on an invitation only basis. Please give us a ring at 541.639.4776. We will also be offering The Litigator at select bottle shops in Portland, Eugene, Corvallis, Bend and Seattle.

Worthy will be donating a generous portion of any profit (hey, call me a dreamer) to a number of non-profits who serve the abused and betrayed.

May it Please the Court!

We are doing our best to mitigate any safety concerns due to Covid-19. Our Eastside Pub will be open for socially distanced outdoor patio dining, and to-go orders. Click the button below for both location's menus as well as other quick links: